The Heart of Hartford by India 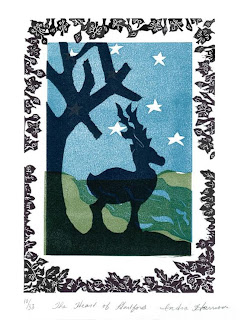 When I first started thinking about this project, my idea was to draw the Hartford Building. I began to rethink this idea when most of my colleagues also started drawing buildings. I began to realize that for me, Hartford is not represented by the buildings but by the details of the city. I was having a hard time connecting to my drawing because it was so architectural, so linear. Ms. Gale and I talked and the idea came about to take the deer, or hart, from the Hartford Building and the stars from the Colt Building and create a scene along the Connecticut River. The boarder was made from the state flower, the mountain laurel, and leaves and acorns representing the Charter Oak tree. I chose to have a boarder to make the viewer focus more on the image. I also wanted a boarder because I enjoy more decorative art and my image looked unfinished without it.